A Star In The Night

Posted on February 27, 2011 by douglaspatents 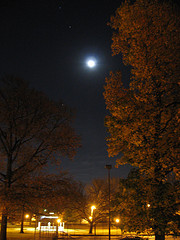 When I think of February, I think of Valentine’s Day, Ground Hog Day, and Presidents’ Day. I also remember that Black History Month falls in February, the shortest month of the year. This makes me remember a joke I heard on the WB network. “There they go again, always trying to keep the Black man down, giving him the shortest month of the year.” Back in the day when they first started Black History Month, I learned in school about famous Black heroes, Martin Luther King, Sojourner Truth, Benjamin Banneker, and others. We remember these leaders for the examples they set, the adversity they faced with dignity, and for the effects they had on others. In my personal list, I place the name of my grandmother, Philee Douglas, as a great leader. She’s not famous. However, she has left a profound effect on my life, through her example.

She was born over 100 years ago, in Mississippi. As many Blacks did then and now, her parents decided to be creative in naming her. They wanted to use the word “love.” The Greek word, “Philo” means love, but the last letter makes the word seem masculine. So they played with the word a little, and came up with “Philee.” In Mississippi, my grandma married Charles Douglas. They had six children, the eldest being my father.

My grandma took the children and took off for California. Back then Mississippi was the poorest state in the Union. It’s the same way now. People, Black and White, have continually moved out of Mississippi, looking to go anywhere, so long as it wasn’t Mississippi. Besides being a poor state, I don’t think that I am going out on a limb when I assume that Blacks in Mississippi weren’t living the good life, especially not during the Great Depression. My grandma ended up in a place now called “South Central L.A.”

Without fail, when you entered her house, there would be the smell of something cooking in the kitchen. I didn’t think she ever completely turned off the stove. She always pushed food our way. I can still remember her giving me the juiciest turkey I ever tasted. She loved jazz music. When I would visit her, her records would play in the background. I talked a lot with my grandma. She would always have an opinion on something. When I would tell her about something I was doing in school, she would often smile and respond, “Sho’ Nuff?” You see, my grandma spoke what some people call “Ebonics.”

Though she talked this way, she didn’t prescribe Ebonics for her children or grandchildren. She came from Mississippi, where undereducation was normal, more so for students of “Separate But Equal” schools. Though she never hit us, we knew that if anyone ever spoke Ebonics in her house, they would get slapped upside the head. There was no messing around. You acted properly around grandma. My grandma would tell me to go to school, and work hard. She didn’t go to school, but she worked hard. During the Great Depression, she worked as a maid. This was the career track for a Black single mother of six, with no education. Wanting the best for her children, she sent them to Catholic School. Though she had to shop at thrift stores, her kids all owned suits. After she reached an age where she could get Social Security, she continued to work as a maid. She told me that the Social Security check “Ain’t enough.”

She would come home exhausted and frustrated. She would tell me, “I’s tired a cleaning them White people’s floors.” Grandma said that when she would prepare to clean the floors, the woman of the house would say, “We lost our mop. But I happen to have this brush and some kneepads you can use.” Grandma told her she had better find that mop, because she wasn’t going to scrub the floor by hand. She would tell me about the fine furniture they had. How “That Lady’s smart! Gots plastic on da couch, and still makes da chillen sit on da rug.” Then she’d look at me and say, “Freddie Jr., youse sittin’ on my couch, sit up straight, don’t you be actin’ lazy.” As a teenager, I got into a phase that some adolescents get into, acting weird, off to themselves, not paying attention to anyone else. I would walk right by Grandma in the morning without saying “Good Morning” or even “Hi.” Grandma didn’t go for that. She made you straighten up and fly right. She made sure you learned courtesy around her.

Once, my brother and I were sitting on the couch, looking bored. Grandma said, “Get up and go to church.” We said that we didn’t know where a church was. She gave us directions, gave us money for the offering plate and sent us on our way. We could have easily not have gone and act like we did go to church. Though we didn’t want to go, especially not to a Catholic Church, we had too much respect for our grandma to lie to her. We walked to the church. After arriving back to Grandma’s house, she explained to us that when she came to California, she wasn’t a Catholic. However, she stuck with the Catholic Church, “Cause they’s da only ones dat helped me when I came to California.” She went through some tough times to get a better life for her children.

I am reminded about my grandma frequently. Every time someone comes on TV, saying, “I live in the Hood. I’m Black. The reality of life on the streets, in the ghetto, is violence. I don’t know any other way. I’m a victim of society.” I also am reminded of her when I see people promoting Ebonics. Some people think this is what being Black is all about. They call you an “Oreo” if you don’t walk like a chicken and talk like Buckwheat. These aren’t things of pride. This is not a part of Black culture. It is not a part of anyone’s culture.

This month, we celebrate our Black heroes. You will never hear a great Black hero use their environment for an excuse for lack of respect. No Black hero speaks Ebonics. Martin Luther King, Jr. didn’t say, “I Have An Excuse.” Nor did he say, “I Has Me A Dream.” Frederick Douglass, Malcolm X, Barack Obama, Barbara Jordan. I could go on. You never heard Ebonics from them. How about Louis Farrakhan? He doesn’t speak Ebonics.

I think of what my grandma would say. I remember her example. How she wouldn’t let me think I can slack off. Responsibility, hard work, respect for others, self-respect, get an education. Grandma Douglas had nothing going for her, but herself. She could have easily given up. Black, single mother of six, undereducated, living in South Central. She lived in the ghetto, but the ghetto didn’t live in her.

This entry was posted in Uncategorized. Bookmark the permalink.